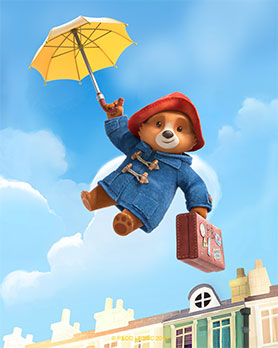 STUDIOCANAL, Nickelodeon and award-winning producer David Heyman today announced a global deal for a brand-new “Paddington” (working title) television series for pre-schoolers. Actor Ben Whishaw (Paddington 1 & 2) will reprise his role as the beloved voice of the title character in the new CG-animated series, which follows the adventures of a younger Paddington. “Paddington” will air on Nickelodeon’s networks worldwide in 2020, while local broadcast partners will be secured in France, Canada, China and Japan.

Fully animated in 3D, the new “Paddington” series sees a younger Paddington writing to Aunt Lucy from Windsor Gardens. Each episode will open and close with Paddington’s letters as he tells Aunt Lucy what he has learned about life through the day’s new exciting adventure. The series will invite a new generation of fans into Paddington’s world full of heart, kindness, slapstick humour, fun and generosity.

Currently in production, “Paddington” is a Heyday Films and STUDIOCANAL production in association with Copyrights. “Paddington” is helmed by Adam Shaw of Blue Zoo (Go Jetters, Digby Dragon, Miffy, Q Pootle 5), and developed for television and written by Jon Foster and James Lamont (The Amazing World of Gumball, Cuckoo, Paddington 1 & 2).

The much-anticipated “Paddington” television series will be produced by multi- award-winning David Heyman (producer of all eight of the Harry Potter films, Gravity, Paddington 1 & 2), Karen Davidsen (formerly with Disney and HIT Entertainment) and Simon Quinn (Isle of Dogs, Fantastic Mr. Fox). The series is executive produced by Rosie Alison (Boy in the Striped Pyjamas, Paddington 1 & 2) and co-produced by Rob Silva.

Executive Producer David Heyman comments: “It is a joy to bring this uniquely life-enhancing bear to a whole new audience of younger children. We are thrilled that the inimitably brilliant Ben Whishaw will continue to voice Paddington. And we are excited to be collaborating with the vibrant and dynamic animation team at Blue Zoo, working from scripts by the wonderfully talented screenwriting team Foster and Lamont. With producers Karen Davidsen and Simon Quinn, we’re all set for a glorious new chapter for Paddington.”

STUDIOCANAL CEO Didier Lupfer adds: "Paddington is such a beloved character for all of us at STUDIOCANAL. We are incredibly happy to be back in his world introducing new generations to his kindness, generosity and spirit. We are inspired by the talented animation team at Blue Zoo partnering once again with our friends at Heyday. Foster and Lamont's writing is so beautifully crafted we can't wait for Nickelodeon and our local broadcast partners to premiere the series."

“We can’t wait to welcome Paddington, one of the world’s most beloved characters, to our global Nickelodeon family with a series that will take him on fun and exciting new adventures, while staying true to his original heartfelt charm and spirit,” said Layla Lewis, SVP Global Acquisitions and Content Partnerships, Nickelodeon.

“I am absolutely delighted to see Paddington back on TV. The series will engage a whole new generation of Paddington-lovers across the world thanks to the bear’s inherent kindness and generosity,” stated Simon Gillham OBE, Chairman of Copyrights.

Director Adam Shaw (Blue Zoo) confirms: “We’re honoured and excited to be working on such an iconic and well-loved character, and Paddington couldn’t be in better hands. It’s what Blue Zoo does best - understanding the character and nuances in the storytelling and successfully translating it into outstanding animation that kids and parents will love.”

A first look of Paddington is also released today.

About STUDIOCANAL
STUDIOCANAL, a 100% affiliate of CANAL+ Group held by Vivendi, is Europe’s leader in production, distribution and international sales of feature films and TV series, operating directly in all three major European markets - France, the United Kingdom and Germany - as well as in Australia and New Zealand.

ABOUT NICKELODEON
Nickelodeon, now in its 39th year, is the number-one entertainment brand for kids. It has built a diverse, global business by putting kids first in everything it does. The company includes television programming and production in the United States and around the world, plus consumer products, digital, recreation, books and feature films. Nickelodeon is one of the most globally recognised and widely distributed multimedia entertainment brands for kids and family, with 1.2 billion cumulative subscriptions in more than 500 million households across 170+ countries and territories, via more than 100+ locally programmed channels and branded blocks. Outside of the United States, Nickelodeon is part of Viacom International Media Networks, a division of Viacom Inc. (NASDAQ: VIAB, VIA), one of the world’s leading creators of programming and content across all media platforms. For more information or artwork, visit http://www.nickpress.com. Nickelodeon and all related titles, characters and logos are trademarks of Viacom Inc.