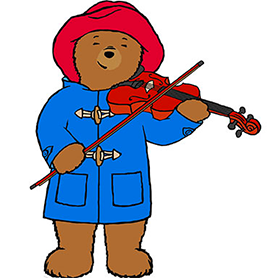 From October through to December this year, Paddington Bear's First Concert will be playing at various venues across the country, accompanied live by orchestras including the City of London Sinfonia, the Royal Northern Sinfonia and the Orchestra of Opera North, with special guest narrators including Simon Callow and John Suchet (please see individual concert listings for further details).

Paddington Bear's First Concert is based on the story by Michael Bond, with an original score by Herbert Chappell and includes music by Schubert, Haydn and Rossini. A very special extended version of the original concert piece, with extra narrative and music (including Piazolla's exciting Libertango), will be performed throughout October, with the original version performed in December.

In this charming musical adventure you can join the world’s most famous bear as he meets the Browns and kindly Mr Gruber in London. Then you follow Paddington all the way to London’s Royal Albert Hall for his first concert, which includes Rossini’s William Tell Overture (famously used as the Lone Ranger music), as well as Haydn’s jolly Surprise and Schubert’s Unfinished symphonies.

October 25th - Huddersfield Town Hall
Paddington will be making a personal appearance at this concert in support of his official UK Charity Action Medical Research. More information can be found here: http://www.operanorth.co.uk/productions/royal-northern-sinfonia-paddington-bear-s-first-concert

There are TWO concerts at 1.30pm and 4pm
Pre-concert activities will be available an hour before each show.
This performance will last approximately 1 hour and there will not be an interval.

Additional concerts will be held in Harrogate and Leeds in December 2015 - more information will be available closer to the time.