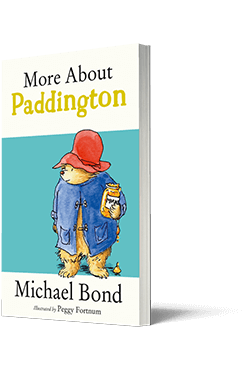 Paddington acquires a very old camera and decides to take a picture of all the family. However, he finds it rather difficult with paws and he gets his head stuck inside the back of the camera. The pictures don't quite come out as he'd planned but they're so unusual that the local shop put them on display in their window.

A Spot Of Decorating

Left to his own devices, Paddington decides to decorate his bedroom but he soon discovers it isn't as easy as it looks. After a nasty accident with a pot of whitewash, he tries wallpapering instead. Paddington decides that the end result doesn't look too bad if he squints; the only problem is he can't find the door!

All ends well when it's decided to get some proper decorators in and Mr. Brown is delighted that he no longer has to do the job.

Inspired by his new disguise outfit, Paddington decides to investigate the mystery of a disappearing vegetable marrow that Mr. Brown had intended to enter in a show. Believing he's tracked down the thief, Paddington mistakenly captures a policeman, only to discover that Mrs. Brown was the culprit after all.

Paddington And The Bonfire

Paddington learns all about Guy Fawkes Night, when people burn bonfires and let off fireworks to celebrate the foiling of a plot to blow up the Houses of Parliament. He decides to make his own `Guy' to burn on the Browns' bonfire, not realising that he's used Mr. Curry's best suit. Fortunately, the wonderful fireworks display more than makes up for the upset he causes.

Paddington experiences his first snow and discovers the delight of throwing snowballs. The trouble is, his aim is not all that it might be, and Mr. Curry ends up on the receiving end. In an attempt to hide, Paddington covers himself in snow, with the unfortunate result that he becomes very ill. Even Mr. Curry seems pleased when he eventually makes a full recovery.

Paddington And The Christmas Shopping

Paddington visits the very imposing Crumbold and Ferns to do his Christmas shopping. He chooses an expanding clothesline for Mrs. Bird but decides to test it first and he upsets more than the store management when he manages to wrap it round half their customers. Fortunately, Paddington's unexpected finding of a valuable tie-pin saves the day.

Christmas Day begins very early in the Brown household and Paddington is soon hard at work opening his presents.

Things are marred slightly when Paddington finds a `bone' in his Christmas Pudding and everyone jumps to the conclusion that he's swallowed one of Mrs. Bird's lucky sixpences. The day ends on a much happier note when the family opens all the presents that Paddington has gone to so much trouble to buy for them. 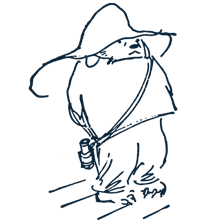