Paddington arrives back in England after a visit to his Aunt Lucy in Darkest Peru and is soon involved in more adventures.

A Bear At Sea

Mr. Brown's plan to surprise Paddington by joining his ship on its return voyage from Peru goes awry when Paddington suffers from a particularly vivid nightmare. After dreaming he's being chased by a giant biscuit and seeing five 'ghosts', he seeks refuge with the ship's doctor. Paddington celebrates his discovery that the Browns and Mrs. Bird aren't hallucinations after all with a large jug of ship's cocoa.

When Paddington disappears after being hypnotised during a ship's concert, everyone is convinced he has fallen overboard. But stopping in order to look for him has a happy outcome for Paddington. It means the ship doesn't cover as many miles as usual and he wins the daily sweepstake in the competition to guess the distance travelled.

Home again, Paddington is on his way to the bank to pay in his sweepstake winnings, when he meets a confidence trickster who cons him into buying a share in the bogus 'Portobello Oil Company'. Paddington learns the dreadful truth over his elevenses with Mr. Gruber and returns home with a very long expression on his face.

A Visit To The Stock Exchange

Paddington visits the Stock Exchange in order to exchange his dud share but before he has a chance to explain he's mistaken for the confidence trickster who sold it to him in the first place. He's almost arrested until the police discover Paddington's kept a record of all his bank note numbers and so, thanks to him, the villain is arrested.

Paddington In A Hole

When the Browns install a new serving hatch between their kitchen and dining room, Mr. Curry decides he wants one too. In an effort to be helpful, Paddington decides to do the job for him, forgetting that Mr. Curry's house is a mirror-image of the Browns'. But far from being cross when he discovers Paddington has knocked a hole in the outside wall by mistake, Mr. Curry is delighted with his new 'delivery hatch'.

Too Much Off The Top

Paddington's job as a junior in a barber's shop gets off to a bad start when he's left in charge for a while and tries out the electric clippers on an unexpected customer. Even a liberal application of glue and old hair clippings can't disguise the bald patch which suddenly appears on the man's head. However, all is forgiven when Paddington introduces him to Mr. Gruber as the man turns out to be an American antique dealer.

Due to a series of misunderstandings, Paddington finds himself partnering a famous Russian Ballet dancer at Judy's school concert. Everyone is stunned by Paddington's performance - it improves by leaps and bounds. Only Mrs. Bird knows the truth; Paddington has been treading on the drawing pins which he used to hold up his tights. 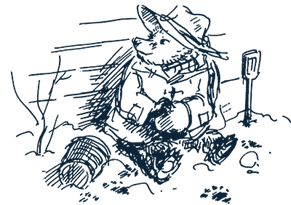