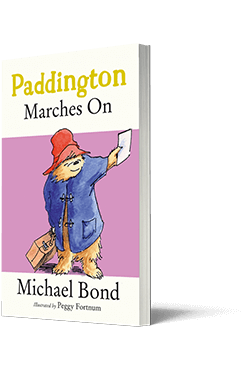 Whether it's trying his paw at plumbing, cleaning the Browns' chimney or visiting a marmalade factory, Paddington always manages to land up in a sticky situation.

Paddington And The `Cold Snap'

When Mr. Curry's pipes freeze up he asks Paddington to fetch the plumber. Unfortunately he can't come so he lends Paddington his blowtorch. The problems start when Paddington melts more than the ice. In fact the end result is so bad that Mr. Curry needs a new bathroom. But instead of being angry, Mr. Curry is delighted when he learns that the insurance company is going to pay.

A Most Unusual Ceremony

Paddington is to be guest of honour at the opening of a new extension to a marmalade factory. Due to a series of mishaps he is mistakenly put to work on his arrival and nearly misses the ceremony altogether. His entrance is most unexpected when he literally rolls up inside one of the orange barrels he has been asked to scrub out.

In an effort the help with the `Spring Cleaning' Paddington decides to lend a paw by sweeping the chimney. The instructions on the cleaning kit look simple enough but he only reads the important part after the brush becomes detached at the top. There's nearly a nasty moment when the Browns believe he's climbed up inside the chimney to get it back.

Mr. Gruber takes Paddington on a surprise trip to a waxworks museum. Some of the exhibits are very realistic and problems begin when Paddington mistakes an attendant for one of the exhibits. The chase that ensues ends up in the `Chamber of Horrors' and even makes the headlines in the evening paper.

On a visit to Jonathan's school, Paddington is invited to take part in a cricket match. It turns out to be an action-packed game, not least because Paddington confuses the other players by using his bat the wrong way round. However, since nothing can be found in the rules to say he can't, he gets away with it and ends up saving the day, and the match.

A Day By The Sea

On a trip to the seaside, Paddington is very excited to learn about a competition being run by a local paper. The first person to recognise Basil Budd in the crowds will win £5. In a case of mistaken identity he pulls a fake beard off the wrong man but when it turns out to be a confidence trickster who's been working in the area, Paddington wins a free lunch instead.

Paddington surprises all the guests at a party by performing some of his tricks. However, he is more surprised than anyone when he learns the party is in his honour and that he will be going back to Peru to take part in his Aunt Lucy's 100th birthday celebrations.

It is a great relief to everyone when he announces during his `thank you' speech that he will be coming back.