Only a bear like Paddington could find himself taking a driving test by mistake, falling asleep on an historic exhibit in a stately home or locking the Browns' grumpy neighbour, Mr. Curry in a sauna.

Paddington At The Wheel

Mr. Brown is due to re-take his driving test but, following some misunderstandings, Paddington is the one who ends up behind the wheel. Being too short to see over the windscreen proves to be a major disadvantage and unfortunately he hits the car in front. Worse is to come when it turns out it belongs to the examiner. However, Paddington is still given a special licence; it covers group 'S', for shopping baskets-on-wheels!

In And Out Of Trouble

Mr. Curry asks Paddington to test out his new hammock but getting into it proves far harder than it looks. After many attempts he finally succeeds, only to have it tear apart beneath him. Mr. Curry is furious but Paddington then discovers that, far from being new, the hammock is an old one which Mr. Brown had left out with the rubbish.

Paddington And The Stately Home

Mr. Gruber takes Jonathan, Judy and Paddington on an outing to a Stately Home. While listening to a music recital Paddington becomes restless and is eventually found asleep on 'Queen Elizabeth's bed'. There's a further problem that evening when Paddington's boots end up being served in the restaurant, as Beef Wellington.

For his 'Bob-a-Job' task, Paddington offers to iron a dress shirt which Mr. Curry is going to wear as part of his outfit in a Fancy Dress parade. In his haste to get it finished, Paddington ruins the shirt and has to make good the damage with the aid of an old camping tent. Mr. Curry's outfit doesn't look anything like he'd planned but nevertheless he ends up winning first prize for the most original entry in the parade.

Paddington Gets A Rise

Paddington wants to send Mr. Brown a birthday telegram but it costs so much he has to try to earn some extra money. He gets a job as an artist's model but he finds sitting still much harder than it looks. In the end he decides to give Mr. Brown his own version of a singing telegram. He nearly gets mistaken for a wailing cat but at least the whole episode serves as a reminder that a raise in Paddington's pocket money is long overdue.

The family have a new sauna bath installed as a surprise for Mr. Brown's birthday but Mr. Curry tricks Paddington into letting him try it out first. Paddington mistakenly locks Mr. Curry inside with his new combination padlock and then can't remember the number. Fortunately it puts Mr. Curry off from ever wanting to use the sauna again.

The Browns go on a Christmas treat to the theatre where Paddington soon finds out that English Pantomimes aren't the easiest things to understand. When the magician asks for volunteers, Paddington is only too eager to oblige, until he discovers that he's going to be sawn in half. 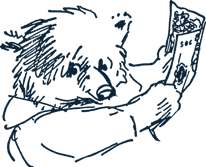