Illustrator of 'Paddington at St Paul's' 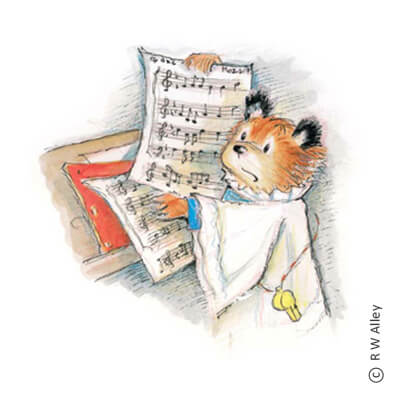 What were your first thoughts on receiving Michael’s text for Paddington at St Paul’s?

I was very happy to visit the cathedral with Paddington. I knew something would happen. And, I was right. It developed into exactly the right sort of bear adventure. I was especially pleased that the story moves from top to bottom of that most complicated building and even ventures into the off-limits-to-tourists bits.

How did you go about illustrating the book?

St Paul’s Cathedral is an enormous building. There's a great deal of detail and squiggly bits. It was clear that a visit was called for in order to get it all right. So, a behind-the-scenes tour was arranged and I took secret pictures to take back to the drawing board. You will notice that at one point you'll need to turn the book vertically to read the text and see the image – your illustrator being unable to think of any other way of capturing the view from the tip of the dome to the crossing below.

How long have you been illustrating Paddington stories?

Paddington and the Christmas Surprise was the first book I illustrated. It was the first in a new series of longer format picture books that Michael wrote. That was in 1997.

What do you love most about drawing Paddington?

Getting Paddington's poses and his eyes right. That's always the hardest and most important part of drawing our hero. The other fun thing is drawing the locations that Paddington visits. Michael always picked interesting spots.

What did you enjoy about working with Michael Bond?

Michael was always, always certain to maintain the integrity of Paddington's character and purpose. His interactions with all the people closest to him, and with the world in general, is consistent, yet always a bit surprising. That sense of surprise and wonder is the trickiest thing to capture in the drawings. A sense of place was also very important to Michael. When I couldn't get to London to view a spot first hand, he would send well-packed envelopes of photos he'd take to specifically capture the scene. When the architecture of Paddington Station was revised ten years after our first picture book telling of the original story, Michael insisted on my reillustrating the book (the station has since been re-worked again - seems like an every 10 years project). And, when Transport for London introduced new red buses, a flurry of pictures and internet links from Michael made sure that I got the new style just right.

What does Paddington mean to you?

Well, after 21 years, Paddington is very much a real friend. He's good company and a good bear from whom to ask advice in how to deal with those events that sometimes upend our day. I wish I could be as brave as Paddington is in moving through the world.

What do you think readers can learn from Paddington?

I hope readers of all ages get this from Paddington - compassion for your fellow creatures as we all navigate the planet together. Paddington does have a strong sense of right and wrong, but he's never mean-spirited in expressing it. He thinks the best of those he meets. I think he even believes that Mr Curry may be redeemable.

Michael was the very rare author who could present the same characters in a consistent and vital way in a wide variety of formats. One of my greatest pleasures has been to picture Paddington in board books, short and long picture books and novels. In the end, I hope Paddington's readers will learn that kindness and bravery triumph over anger and fear as a model for a happy life for all.