Paddington™ to Become a Champion for Children in Support of UNICEF 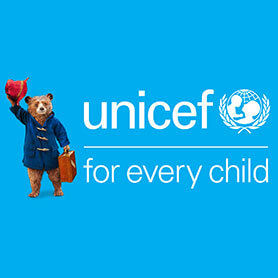 Paddington, the beloved children’s character is to become a champion for children, and further UNICEF’s goal to promote the rights of children all around the world, and to keep them happy, healthy and safe. The partnership was borne out of recognition that the values exemplified by Paddington, of kindness, tolerance, and perseverance in the face of adversity, or marmalade-related mishaps, make him the perfect champion for children’s rights.

The partnership’s first activations will happen in the UK, the USA, and Europe and are planned to coincide with the upcoming release of Paddington 2, the hugely anticipated sequel to the 2014 film Paddington, and the 60th anniversary of the first Paddington book, which will be celebrated around the world in 2018.

In the UK, Paddington will support UNICEF UK’s campaign around refugee children and will be featured prominently in UNICEF UK’s OutRight campaign, in which millions of children around the UK, learn about their own rights and become empowered to speak out in support of the rights of all children. This year’s campaign will feature the story of the small bear, who has to leave his home in Darkest Peru, and is sent to London with a label around his neck politely asking whoever finds him to ’Please look after this bear. Thank you.’ Paddington finds a new family, home and community, with a little help from his friendly nature, politeness, and ability to stand up for himself when needed, by fixing people who have ’forgotten’ how to behave with a ’hard stare’. His story will help children in the UK learn, that the right to a home, to be cared for and to an education applies to all children.

Activation in the other countries will be communicated over the coming months.