Michael Bond, the creator of Paddington 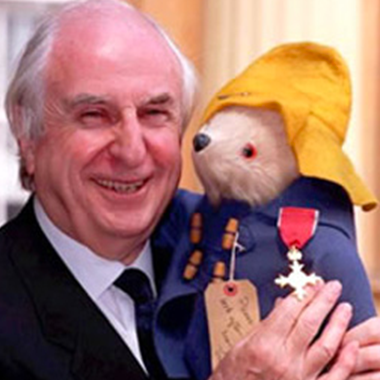 "When I wrote those few words, I had no idea quite what a change they would eventually make to my life. It was really a case of putting something down on paper in order to get my brain working that morning."

"When I was small I never went to bed without a story. But I doubt my mother ever pictured me writing for a living. In fact, when I eventually gave up working for the BBC in order to write full time, I think both my parents were worried that I had given up a nice, safe job for what sounded to them like a very precarious existence."

Michael Bond was born in Newbury, Berkshire, England on 13th January 1926. He was educated at Presentation College, Reading. During World War II Michael Bond served in both the Royal Air Force and the Middlesex Regiment of the British Army.

He began writing in 1945 and sold his first short story to a magazine called London Opinion. This experience helped him decide that he wanted to be a writer.

It was while Michael Bond was working as a television cameraman for the BBC that he first came up with the idea for Paddington and he recalls in his own words how this came about:

"I bought a small toy bear on Christmas Eve 1956. I saw it left on a shelf in a London store and felt sorry for it. I took it home as a present for my wife Brenda and named it Paddington as we were living near Paddington Station at the time. I wrote some stories about the bear, more for fun than with the idea of having them published. After ten days I found that I had a book on my hands. It wasn’t written specifically for children, but I think I put into it the kind things I liked reading about when I was young."

Michael Bond sent the book to his agent, Harvey Unna, who liked it and after sending it to several publishers it was eventually accepted by William Collins & Sons (now Harper Collins). The publishers commissioned an illustrator, Peggy Fortnum, and the very first book "A Bear Called Paddington" was published on 13th October 1958. After the first Paddington book was accepted, Michael Bond went on to write a whole series and by 1965 his books were so successful that that he was able to give up his job with the BBC in order to become a full-time writer.

Since the first publication the Paddington books have sold more than thirty-five million copies worldwide and have been translated into over forty different languages, including Latin.

With his extraordinary flair for developing characters, Michael Bond has written much more besides Paddington including children’s television series The Herbs, books about a guinea pig called Olga da Polga and a series of adult novels about a French detective turned food guide inspector, Monsieur Pamplemousse. In total Michael Bond has written almost 150 books, including his autobiography 'Bears and Forebears'.

In 1997 Michael Bond was awarded an OBE for services to children’s literature and this was followed by a CBE in the Queen's Birthday Honours in 2015.

For the last 37 years of his life Michael Bond lived in London, not far from Paddington Station where it all began. He continued to write until shortly before he died on 27th June 2017, aged 91.

On 13th January 2016 Michael Bond celebrated his 90th birthday. A few fans, and a couple of well known faces, got together to wish him many happy returns. You can see the short clip below:

Thank you to everyone who contributed - we hope you enjoy it!