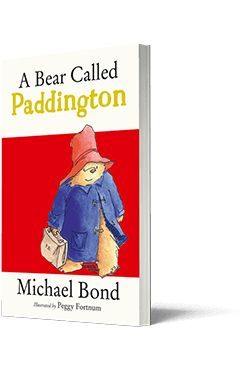 The very first book in which the Browns meet Paddington on a railway station and discover that ordinary things like having a bath or travelling on the underground can soon become quite extraordinary if a small bear is involved.

Please Look After This Bear

Mr. and Mrs. Brown first meet Paddington on a railway platform while waiting for their daughter Judy. He is sitting on an old leather suitcase near the lost property office, wearing an unusual hat and a label round his neck which reads `Please Look After This Bear. Thank You'. He explains that he has been sent from Peru by his Aunt Lucy who has had to go into the Home for Retired Bears in Lima.

After a sticky adventure with some cream buns in the station buffet, they take him in a taxi to stay with them in their home at Number 32 Windsor Gardens.

A Bear In Hot Water

Paddington meets Judy's brother Jonathan and Mrs. Bird, the Browns' housekeeper, who decides Paddington is badly in need of a bath. The only problem is that he has never experienced taps or plugs before and Jonathan and Judy soon need to go to his rescue when water starts dripping through the sitting room ceiling.

The Browns tell Paddington they are taking him shopping. In an effort to be quick, he puts the remains of his breakfast bacon in his suitcase with the result that even before they've reached the underground, they are followed by a large number of dogs. Things become even more complicated when Paddington encounters escalators for the first time.

Mrs. Brown takes Paddington to Barkridges where she buys him a duffel coat with a large hood. When it falls over his eyes, Paddington becomes disoriented and enters the wrong door. He is as surprised as the crowd outside when he discovers he's part of the store window display. However, far from being displeased with the chaos he causes, the manager is delighted at the large number of people who flock to see the 'show'.

Paddington And The `Old Master'

Paddington's friend Mr. Gruber, who owns an antiques shop in the Portobello Road, tells him that paintings can sometimes hide an `Old Master' that has been painted over with another picture. Anxious to discover one for himself, Paddington soon sets to work on a picture that he finds. Unfortunately it turns out to be one Mr. Brown had painted to enter in an art competition. Realising his mistake, Paddington sets about repainting it and is almost as surprised as Mr. Brown when it ends up winning first prize.

A Visit To The Theatre

When Paddington joins the Browns for an evening at the theatre, he takes the play a bit too seriously and before anyone can stop him, hurries off to complain to the leading actor, Sir Sealy Bloom, about his treatment of the heroine. Things take an interesting turn for both the audience and Paddington when he inadvertently ends up as part of the play.

Adventure At The Seaside

Paddington is taken on his first visit to the seaside. After trying his paw at building a sandcastle for Mr. Brown's competition he decides to take a well-earned rest. Unfortunately for Paddington, the tide is coming in and he is swept out to sea in a bucket. The fishermen who rescue him at the end of the pier are amazed when he tells them he's come all the way from Darkest Peru!

It is Paddington's first birthday since going to live with the Browns. He marks the occasion by putting on a magic show with his new conjuring outfit much to the enjoyment of everyone except the Browns' grumpy next door neighbour, Mr. Curry, who wasn't even invited in the first place! The final straw comes for Mr. Curry when Paddington borrows his watch to demonstrate a trick; unluckily for Mr. Curry and the watch, Paddington turns over two pages of his instruction manual at once.