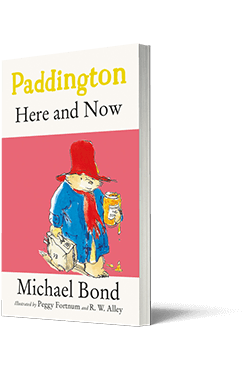 This twelfth novel in the series, published fifty years after the very first book, finds Paddington still getting himself into scrapes whether it's having his shopping basket towed away or dealing with the complications of air miles.

Paddington’s morning gets off to a bad start when he discovers his shopping basket on wheels has been towed away. Matters get even worse when he decides to report it at the local police station and a series of misunderstandings lead to his arrest. Fortunately for Paddington, not only is his basket returned but the contents have mysteriously multiplied in the meantime.

When Mrs. Bird spots an intruder through the window, Paddington volunteers to apply anti-burglar paint to the Browns’ drainpipes. Spotting an opportunity to get something for nothing, the Browns’ mean neighbour Mr. Curry talks Paddington into doing his as well but he gets more than he bargained for when Paddington decides to paint his gate.

Paddington is intrigued when his friend Mr. Gruber acquires a "Player Piano" and soon draws a large crowd when he pretends to play it in the shop window. It’s so realistic that before he knows it he’s acquired an agent and is the surprise turn in a forthcoming charity concert. Paddington is the one who ends up being surprised when he discovers he has to play an ordinary piano but he manages to delight the audience with his unique style of entertainment.

The Browns decide to throw a small party to celebrate Hallowe’en but they soon end up with an unwanted guest in the form of Mr. Curry who accidentally gets locked out of his house when Paddington’s "Trick or Treat" goes wrong. Fortunately, the Browns’ neighbour doesn’t stay for long after trying a bowl of Paddington’s special stir-fly soup.

While working in the Browns’ front garden, Paddington is approached by a man carrying out a survey. As the interview progresses, so do the misunderstandings, leading to a report in the local paper about illegal immigrants and an undercover trade in organ transplants. The Browns have no idea Paddington is involved, until they read the words "marmalade sandwiches" which then prompts them to start wondering about Paddington’s own legal status as a refugee.

Keen to give the family a Christmas present they won’t forget, Paddington visits the local travel agent but his shock at the price of a holiday for seven is equalled by that of the manager when he learns that Paddington is hoping to pay for it with a single Air Mile. However, all that is soon forgotten when Paddington arrives home and receives a very special and unexpected visitor ...

Nobody is more astonished than Paddington by the arrival of his Uncle Pastuzo who has dropped by while on his world travels. After captivating the family with tales of how he made his fortune, it’s time for another surprise when he takes them all on a special trip on the London Eye. His departure is as sudden as his arrival but there’s one more surprise left for Paddington - some treasure left buried in the garden by his uncle.