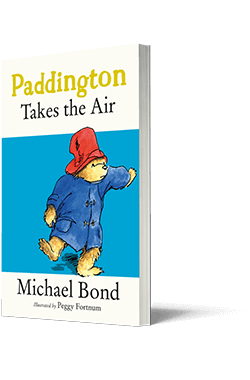 "I do wish I could see into Paddington’s mind," said Mrs Brown, "I know something’s going on. I can recognise the signs." And there is plenty of cause for concern when Paddington takes an interest in detective work. Not to mention sewing and ballroom dancing!

A Visit To The Dentist

Paddington is most upset when he loses a tooth and it gets put down the waste disposal. A visit to the dentist is called for, but on this occasion it's the dentist rather than his patient who ends up crying out in pain. Paddington tries to make amends by giving the dentist some of his everlasting toffee; an offer he soon regrets accepting!

A Stitch In Time

Paddington is very anxious to test an old sewing machine which he has acquired from Mr. Gruber. It all seems quite simple until he attempts to alter some of Mr. Curry's trousers. In desperation he calls an emergency helpline number in the instruction book. The machine turns out to be a very rare early model and the company are so pleased that they offer to repair Mr. Curry's trousers for free.

When Paddington enters a gymkhana at Judy's school, he soon discovers riding is much harder than it looks. After getting a record 452 faults in the first competition, it looks as though all is lost. However, things take a decidedly better turn in the Chase-me-Charlie race after Paddington mistakes a head of garlic for one of Mrs. Bird's meringues.

Paddington and Mr. Gruber have spent weeks restoring an old car for a forthcoming parade but on the day disaster strikes when an accident whilst `tossing the Caber' causes the car to lose a wheel. Meanwhile, having survived several rounds in a wrestling competition with 'Two-Tons Muscles Galore' Paddington hits on the bright idea of asking his aptly-named adversary if he could save the day by acting as a counterweight for the stricken vehicle.

The Case Of The Doubtful Dummy

After reading one too many detective stories, Paddington sees some strange goings-on in a shop window and decides to investigate. A job with the store as a sandwich-board wearer seems the ideal cover until Paddington follows his suspect into the canteen and there's a nasty accident with a cash register and some coffee. When a story about the incident appears in the local paper, Mr. Brown is surprised to discover how confident Paddington is that he can solve the mystery.

When Paddington is invited to a Charity Ball he has to hire a dress suit. While trying it out he gets mistaken for a well-known food critic and much to his surprise is given the prime window seat in a newly-opened restaurant. He gamely tries everything on the menu but is surprised still further when he is presented with the bill. However, such a large crowd of onlookers has gathered outside the window that the restaurant is only too pleased to waive the charge.

After hours of practising his dance steps with the aid of a pillow and an old book borrowed from Mr. Gruber, Paddington finally attends his first ball. He soon finds dancing with a real person is much harder, especially when she is none other than the hostess, Mrs. Smith-Cholmley. However, everyone is stunned by their performance in the dance competition, little realising that Paddington's claws have become stuck in the straps of his partner's shoes or that a marmalade sandwich has somehow found its way down the back of her dress.