Paddington Film Opens in the UK 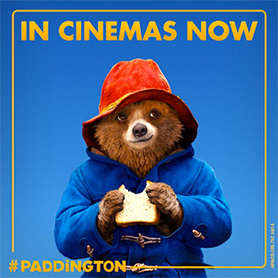 Following the World Premiere at the Odeon in London’s Leicester Square, PADDINGTON went onto general release in the UK on Friday 28th November.

Paddington’s movie debut has had a fantastic response from both movie critics and cinema audiences around the country.

Robbie Collin in The Telegraph

"The #Paddington movie was everything we wanted it to be & more!"

"a bear-hug of a family treat"

Mark Kermode in The Guardian

"#paddington was great - thoroughly recommend it"

"this is a warm, witty and wondrously inventive great big bear-hug of a movie"

"@paddingtonbear superb. Took my daughter. A great script and really poignant. We both really enjoyed it. #Paddington"

"Went yesterday a fantastic family film. At the end everyone was clapping in the cinema. Best film I've seen for a long time, oh and the children enjoyed it too!!*"

"This utterly lovely movie might be finest family film ever made"

David Edwards in The Mirror

"We went this morning and we absolutely loved it. We've been looking forward to it for ages and it did not disappoint, a lovely, very funny (we were still laughing about different bits on our way home), charming family film, which we definitely be watching for years to come. Just hoping they make another one now!"

"@paddingtonbear we just love your movie!!! We cried and laughed last night at vue in Eastleigh; );) LOVE IT!!"