Paddington joined by HRH The Duke of Cambridge at China Premiere 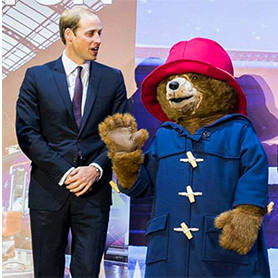 The PADDINGTON movie held its grand Chinese premiere at Shanghai Film Museum on March 3rd, on the occasion of HRH The Duke of Cambridge’s visit to China to open the GREAT Festival of Creativity in Shanghai.

Director Paul King and producer David Heyman walked the red carpet with celebrated Chinese actor Chen Xuedong (Tiny Times) who voices Paddington in the Chinese version of the movie. The crowd gave a very warm welcome to Paddington himself who was present for his Chinese debut, and warmer still for the Duke of Cambridge upon his arrival.

“We couldn't be happier to bring our cinematic adaptation of Michael Bond’s Paddington to China and to share his generous spirit with Chinese audiences” said producer David Heyman on the red carpet, with director Paul King adding “Paddington is the story of a young bear who travels around the world to find a warm welcome and a friendly home. We hope Chinese audiences will greet him with open arms, as others have done around the world”.

Also in attendance on the red carpet was Rt Hon Sajid Javid, MP and Secretary of State for Culture, Media and Sport in the United Kingdom, who was in Shanghai to launch the first UK-China Year of Cultural exchange. He said "It's brilliant to see a much-loved British story like Paddington being celebrated and appearing on the big screen in one of China's most prestigious film museums. Throughout this Year of Cultural Exchange we can look forward to more events such as this, showcasing UK culture in China and Chinese culture in the UK.”

While in China, director Paul King and producer David Heyman will also be participating in various talks about their experiences with PADDINGTON and within the UK film industry at the GREAT Festival of Creativity.